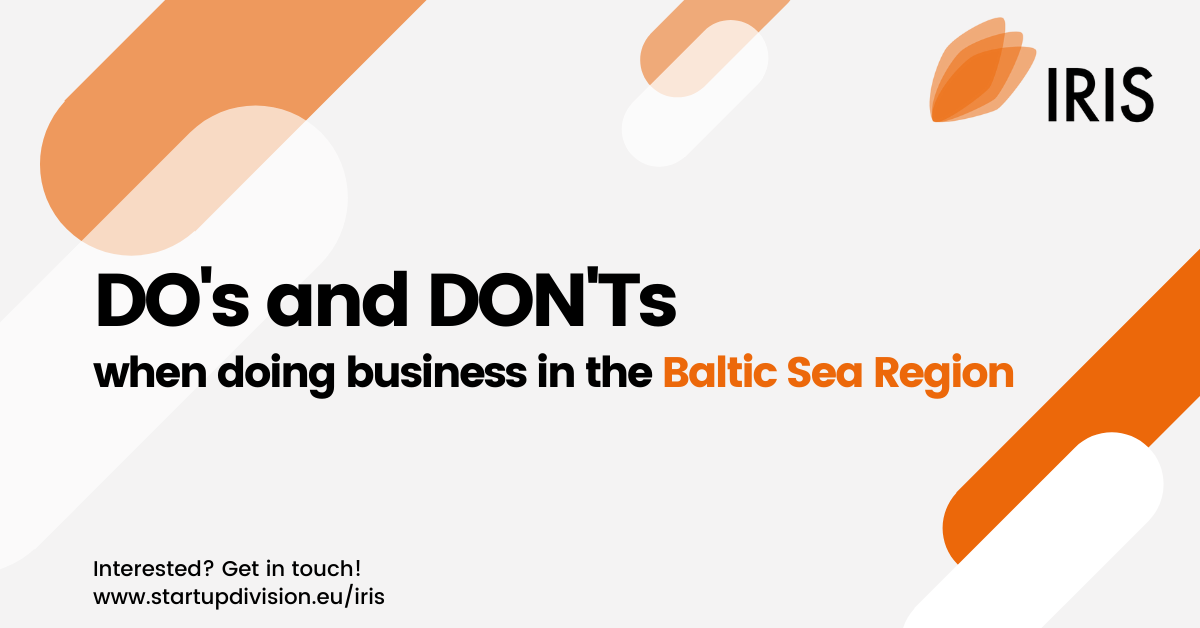 Doing business with partners abroad? Be prepared for cultural peculiarities – don’t waste time on small talk during meetings in Scandinavian countries and Germany, seek win-win negotiations in Finland, and avoid discussions on politics and history in Lithuania or Poland. These are only some of the recommendations on doing business in the Baltic Sea region, collected by the IRIS project after interviewing representatives from local business organizations in 10 countries.

Business communication: how far can you go

The IRIS project survey respondents unanimously agreed that sincerity, polite tone, and being straight-to-the-point are the most valued qualities in business communication. In the Scandinavian countries, people tend to speak accurately and clearly during meetings, but they are familiar with humor, which they understand and accept as a positive aspect. However, small talk and personal questions won’t be taken easily – time is precious and you should be straight to the point both in Northern Europe and Germany. Going to Lithuania, Poland, Latvia, or Kaliningrad district? Feel more relaxed – a short chit chat on hobbies, sports or family is encouraged.

If you are having a meeting with business partners in Scandinavian countries or Estonia, mind the personal space, try not to interrupt, and avoid speaking loudly. Showing off emotions is not well tolerated in Germany too, whereas Belarussians tend to avoid conflicts and heated discussions.

Etiquette is no less important – in Latvia and Poland, you can be late for a meeting by up to 15 minutes, but in Denmark and Germany, it would be a significant disadvantage for you – if you are late, potential partners can interpret it as disrespect.

Giving and receiving feedback is one of the trickiest things in human communication so there is no surprise criticism can be a slippery slope in international business meetings. For example, Estonians do not like to be criticized in the business environment, but Germans or Finns take critical feedback favorably especially if it is facts-supported. For them, it is a sign of sincerity not taken personally.

However, criticism can also have a broader meaning. In business meetings, you need to pay attention to the connection you have with the local environment. Suppose you feel comfortable with representatives from another country and have communicated with them in the past. In this case, you may feel more relaxed, but keep in mind that criticizing business decisions and cultural aspects can have a binary outcome that determines the success of your meeting.

Soft vs. aggressive negotiating is yet another business communication hook you should be aware of. Germans are hard and competitive bargainers, however, you should not apply too much pressure or be impatient. Finns are soft at bargaining – compromise and win-win decisions are important, same as in Sweden. If your partners don’t show emotions, that does not mean the deal is off – they just need more time to think it through.

Latvians, Lithuanians, and Poles prefer agreements on paper. As in the neighbouring Kaliningrad district, you should be very detailed and precise about your offer, but avoid hard pressure tactics.

Decision-making and who is in charge is one of the critical aspects of the meeting, determining the further course of cooperation. However, the principles of hierarchy in other countries might be far from acceptable if we compare them to the ones we use in our home country.

The Danes value a liberal approach, so you can meet both company leaders and lower-level employees during meetings. In Denmark, you have to talk and consult with everyone at the conference and not ignore anyone’s opinion. The same applies to Sweden, where subordinates are often entitled to make final decisions.

In Poland, however, this approach is wholly unacceptable and can even be seen as an insult to company executives. Poles are accustomed to talking to company executives when it is about decision-making and potential cooperation. Therefore, your meeting must be hierarchically equal – managers meet with managers.

Hierarchical principles may also emerge in Belarus, Lithuania, Latvia, and Germany, meaning that companies would be expected to have representatives of the same or similar positions in the meeting and authorities should not be challenged openly.

Politics and other international relations are hot topics that have earned red flag status. An imprudent remark can literally break the business negotiations. In the Baltics and Poland, history with neighboring countries is a sensitive topic, better to be avoided unless you know the history well. In Russia, political issues should not be widely discussed as well. Moreover, Russians especially like humor and enjoy laughing at themselves, but you shouldn’t forget that this is not tolerated from foreigners unless you have a long established friendly relationship.

Risky zones exist in the old European democracies, too. Germans tend to be discreet about political topics, however, business meetings might include discussions about arts, culture, and events. Although Swedes might look very liberal, non-hierarchical, and open, criticizing society is definitely a red flag – they are honestly proud of it. Going to bring an interpreter to a business meeting in Denmark? This might be looked down upon – you are expected to speak English.

This overview has been conducted as part of the  IRIS project, funded by the Interreg Baltic Sea Region programme. The project aims to create new tools and share best practices among incubators in the Baltic Sea Region. Learn more about the IRIS support instrument for internationalisation: http://www.witeno.de/iris/de/priority-areas/internationalisation-of-smes-business-activities/